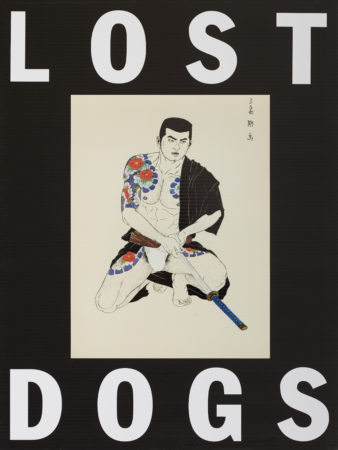 Cali Dewitt (1973- )
Born in Canada. Multi-artist based in Los Angeles. Dewitt has exhibited extensively in the United States, Europe, and Asia. He is also the owner of the independent music label Teenage Teardrops, the designer of the brand SOME WARE, the organizer of the artist collective WSSF, and is also known for his work as a merchandising designer for Kanye West.

Go Mishima (1924-1989)
A Japanese artist of gay eroticism in the Showa era. He was given the artist name Go Mishima by Japanese prodigious writer Yukio Mishima, and was active as a gravure artist and illustrator for Japan’s first commercial gay magazine “Barazoku” and Japan’s leading gay magazine “Sabu”. After his passing, only a limited number of people know the real face of Mishima, but it is said that he was a person who always kept the tableware in the cabinet in perfect alignment.

KOMIYAMA YUKA BOOKS is pleased to announce the release of the collaborative artworks by Cali Dewitt and Go Mishima.

Despite his diverse activities and involvement with many people, such as organizing music labels and apparel brands, and working as a merchandising designer for famous artists, Cali Dewitt is a mysterious artist. Like fragments of words taken from the Internet, the powerful, linear, and inorganic messages of his works consistently convey the contradictory nature, melancholy, and loneliness of our convenient information society. As an artist living in this age, Dewitt continues to create works that calmly overlook the society itself while connecting with others.

Go Mishima, on the other hand, was a man who continued to paint his own unique image of Japanese males in the midst of Japanese Showa era, at the dawn of Japan’s gay culture. Mishima’s beautiful and elaborate images of men, created from his experience as a Japanese-style painter, have attracted attention not only from the homosexual community but also from many cultural figures. While gay magazines in the West often show scenes of multiple men at play, Mishima’s young men with short hair, tattoos, and loincloths, sometimes carrying Japanese swords, are all alone against empty white backgrounds. Although they are drawn with a dignified gaze and a strong physique, we cannot help but feel the lonely isolation of the minorities from the world and others, and the poetic emptiness of their hearts in the detailed brushstrokes and the blank spaces surrounding them.

In the works of both Dewitt and Mishima, it is easy to feel the presence of individuality, loneliness, melancholy, and the quiet but overwhelming power and pressure of the majority and the mainstreams, and there is a synchronicity that transcends the time and space between these two artists. We at KOMIYAMA YUKA BOOKS will visualize the resonance of this timeless dialogue of the mind and present it in these collaborative art work series.

We would also like to take this opportunity to express our sincere gratitude to Mr. Bungaku Ito for granting the use of Go Mishima’s works for this collaboration. Since there are no prints of Mishima’s works and only the original art pieces exist, it is very meaningful and an honor to be able to present his works to a new generation/era in this way.

Opened on August 8th, 2021, this art bookstore is located in GR8, a contemporary boutique in Harajuku, Tokyo. Yuka Takahashi of Komiyama Book Store, a long-established antiquarian bookstore in Jimbocho, Tokyo, is curating this bookstore. In a space that resembles a small hidden room of only 7.8 square meters, there are books by leading Japanese photographers such as Nobuyoshi Araki or Masahisa Fukase, art books from overseas, and vintage rare books related to fashionable fetish and queer art. Regardless of the category, the books are handpicked through Takahashi’s unique point of view. The store also introduces new projects such as zines and artworks created with domestic and international creators who have close relationships with GR8 and Takahashi.